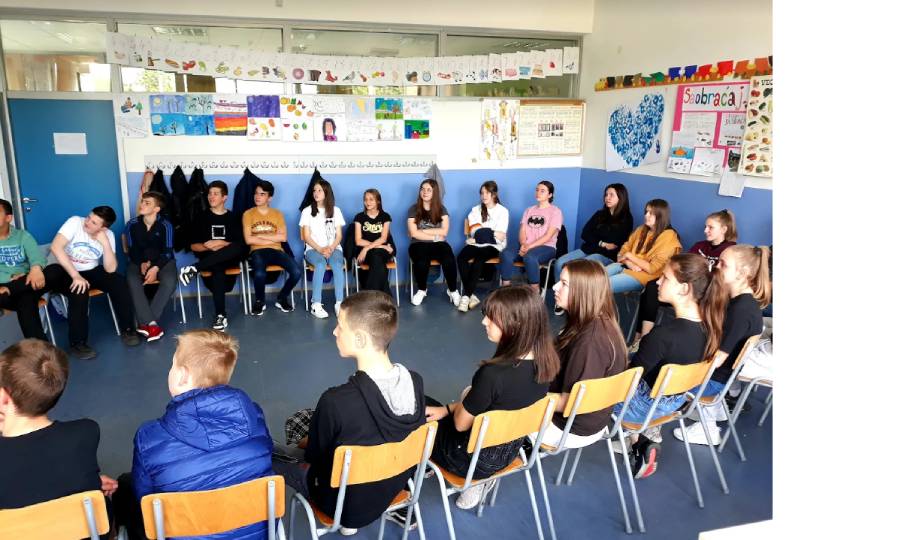 Kanita Granov, a teacher at the Seventh Primary School in the municipality of Ilidža, held a second philosophical interrogation on May 10, 2022. on the class community of VIII-3 grades. What it looks like when a teacher visits former students is presented below.

The “Philosophy for Children – P4C” method is applicable at all levels of education and among students of different ages. Primarily, teacher Granov leads third grade students in primary education, but there is a desire for philosophical questioning among the older group in order to make a comparison of younger and older.

After a relaxing game and an educational film as a stimulus, students move on to creating great ideas from which creative questions arose, and it happens that there is an equal number of votes on two questions, which requires a re-vote. Ultimately, the philosophical question was: “How much do our feelings affect our thinking?” The question is relevant at this age level, and it was inevitable to mention sympathies and feelings after the breakup.

The questioning was interesting and different conclusions were drawn. The review of the class had special observations, the evaluation part which received high marks among the older group of philosophers who desperately need encouragement to freely express thoughts, ideas and proposals, precisely for the simple reason that at this age the shame of public as a major challenge in exposure.

The students concluded that they like this different, more innovative and relaxing way of working in which they feel that they are a team working towards a common goal, that they are much more respected, complement each other regardless of differences of opinion, respect and less discomfort in public speaking.

Such actions of the teaching staff show effort and commitment and motivation to contribute to different ages through the vertical line through educational activities and once again proves the humanity of the vocation of educational work.