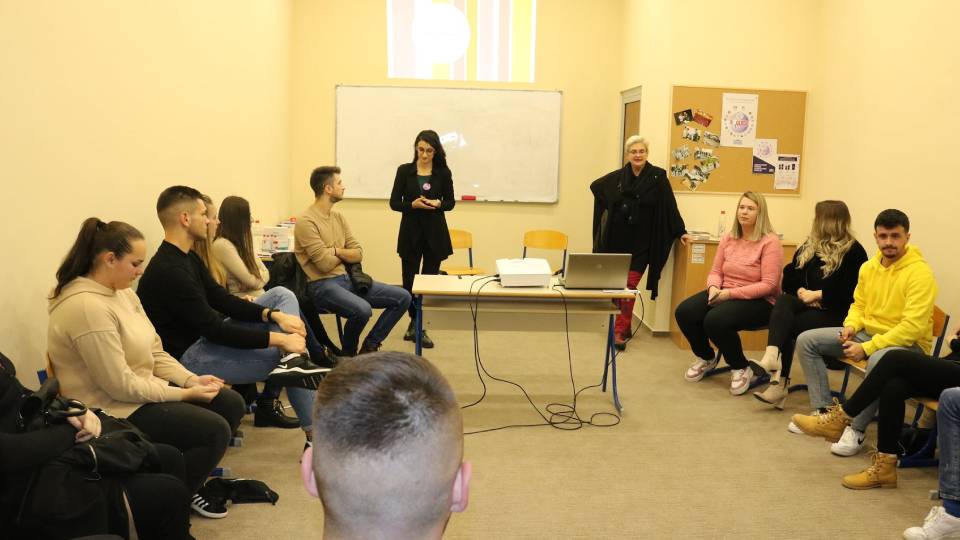 During the campaign “16 days of activism”, and within the project University and Gender Mainstreaming, students of the International University of Travnik in Travnik, actively participated in raising awareness on gender-based violence, focusing on violence against women and gender-based discrimination / inequality which we encounter in everyday life.

The activities that the students realized were:

– Workshop of students and representatives of the Center for Youth Education (CEM) Travnik, through which the project coordinator of CEM, Amela Mrakić spoke about the causes of violence, gender-based violence, gender inequality, violence against women. The workshop was held at the International University of Travnik (IUT), in the premises of the Student Parliament,

– Creating visuals with the help of which they illustrated gender inequality through two stories: the situation during employment or the usual job interviews and the situation with the distribution of household chores within the family. This activity aimed to raise public awareness of the problems that may arise, and are gender-based. The visuals were printed and delivered to high schools in the area of ​​the town of Travnik. We will print the stories and deliver them to all high schools,

– Workshop in cooperation with the Center for Women’s Rights from Zenica on the topic “Prevention of violence and gender role in society.”

Through the activities, IUT students educated over 30 students. 14 media information about the project was published through the social networks and local portals.